Celebrating The Fourth of July in the Age of Cybersecurity

In less than a week, the United States, land of the free, home of the Whopper, and oh yes, home to the modern commercial computer revolution, will turn another year older.

On this 241st birthday, millions of us will demonstrate our patriotism and love of country. Red, white and blue clothing and flags will be common – as will barbeques, beach parties, and for the historically inclined, getaways to Washington DC, Philadelphia and Boston.

Yet for companies large and small, demonstrating their patriotism this year is taking on added seriousness as data security breaches continue to make headlines across the US and around the world. Instead of gimmicks, company CEOs should instead focus on the gigabytes and gigabytes of data stored on-site and in the cloud. Why? Because a failure to protect your company and your customers’ proprietary information is a failure of national security.

Thus, when the president of the United States issues an executive order calling for enhanced cybersecurity of federal networks and critical infrastructure, you know the issue has taken on new significance.

Even with the full weight of Washington pressing down on this issue, a recent survey of company CEOs paint a very unpatriotic picture. According to data analytics company FICO, more than half of US executives surveyed believe that the number of data breach attempts will be higher in 2017 than in 2016, yet less than half (49 percent) will match that growing threat with an increase in cybersecurity funding.

The best way to do Uncle Sam – and the nation – proud this Independence Day is for companies to improve their cybersecurity readiness. 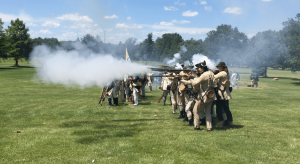 That process begins with first getting a sense of the scope of the problem, borrowing from the adage “you can’t manage what you can’t measure.” Already big banks like JPMorgan, Goldman Sachs and Morgan Stanley, along with other non-financial businesses have teamed up in an effort to create principles that would guide a type of cybersecurity ratings system, similar to a FICO credit score which would asses their relative security risk.

But like some Continental Army solider surveying the British from the high ground of Bunker Hill, measuring the scope of the problem is only the first part of the cybersecurity solution. Action is needed. And Kelly Communications Systems, an independent supplier of IT centered products, consulting, and support services for more than 30 years, knows how to turns insights into actions. It does this through partnering with a host of IT leaders and their groundbreaking cybersecurity business solutions.

Netskope, a cloud-access security broker, has created a new kind of security platform that enables enterprises to secure sanctioned and unsanctioned cloud services, protect sensitive data across the cloud, and stop the most advanced online threats. Using patented technology, Netskope’s cloud-scale security platform provides context-aware governance of all cloud usage in the enterprise in real time, whether accessed from the corporate network, remotely, or even from a mobile app or sync client. This means that security professionals can understand risky activities, protect sensitive data, stop online threats, and respond to incidents in a way that fits how people work today.

The Netskope Active Platform can be deployed 100% in the cloud, as an on-premises appliance, or via a hybrid configuration. Once clients gain access to their Netskope cloud tenant, cloud traffic is then steered for inspection using Netskope’s patented all-mode traffic steering technology that provides several out-of-band and inline options. This ensures that clients get 100 percent coverage for users on premises, mobile, and remote, whether they are using a browser, mobile app, desktop app or sync client to access sanctioned or unsanctioned cloud services.

From Muskets to Mainframes

In the 241 years since our nation’s founding a lot has changed. But whether it’s the American Revolution or today’s increasingly aggressive cyber warfare, there will be winners and losers in these new battles too.

The question is, which side of history will your company be on in the decades ahead? In this case, being on the winning side of history, isn’t just right, it’s patriotic!